In 2006, Carl “Perfect Legend” White secured his first world championship by winning the Dead or Alive 4 tournament at the Evolution World Finals in Henderson, Nev.

Overcoming a weekend-long flu, Perfect Legend fought many rivals as well as an ailment to prevail. Given his performance in the Evolution qualifying tournaments, he was awarded a bye until the quarterfinal round. However, he lost his first-round contest to Jeremy “Black Mamba” Florence, one of his most intense foes.

From there, Perfect Legend rallied back, Eventually, Perfect Legend had to face Black Mamba again, and he didn’t let up, winning in a rout to keep his unbeaten roll going.

In the finals, he defeated one of his most heated rivals, Emmanuel “Master” Rodriguez, in two championship sets to claim title. Perfect Legend’s ascent to the top was just the beginning, as he rode the success to several more Dead or Alive 4 tournament wins in the next two years. 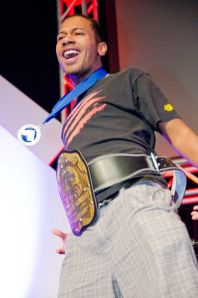 Carl “Perfect Legend” White returned to the grand stage of the Evolution World Finals in 2011. After five long years of wondering whether he would win another world championship in any game, he accomplished the feat, prevailing in the Mortal Kombat 9 tournament.

Perfect Legend, now much wiser with five years of additional fighting game experience, went undefeated in the preliminaries of the tournament. In the grand finals, he faced off against Joseph “R.E.O.” Grosso. R.E.O. won the first contest, forcing a rematch in the double-elimination tournament. Perfect Legend refocused and won the second grand finals to win the world championship.

It was a long road for Perfect Legend, who was considered one of the top players to compete in fighting games but had fallen short on the grand stage ever since his 2006 world championship win.

Nether Realm Studios provided the tournament with a championship belt, which was to be awarded to the champion, and Perfect Legend wore it with pride.

And not to be left out in diversity. Perfect Legend scored a 3rd place finish in the Super Street Fighter 4 EVO 2011 Online Competition earlier that year.

In 2012, Carl “Perfect Legend” White became just the third player ever to successfully defend his Evolution World Finals championship when he won the Mortal Kombat 9 tournament at Caesars Palace in Las Vegas.

Perfect Legend had a rough road going into Evolution, as he was the favorite in several previous tournaments but failed to win those events.

Vowing that he would be at his best at Evolution, he won the tournament with an undefeated record, beating Emmanuel “CD JR” Brito in the championship match.

He remains the only player to ever reach the top eight in three different Evolution tournaments and win them all.